Colostrum. They call it liquid gold for good reason. This amazing liquid contains everything your newborn baby needs to thrive in their first hours and days after birth.

In fact, colostrum is sometimes referred to as your babies first vaccination,due to the high percentage of protective antibodies and white blood cells that it contains. It's also packed full of 'good bacteria' to help colonise the gut and give baby the best possible start to life. A living substance, colostrum is completely unique to each mother and baby pair.

Your breasts will begin producing colostrum around the 16 week mark of pregnancy. Some women may notice small amounts of leakage while others won't notice anything different. Don't fret either way! Leaking both colostrum and breastmilk is not the only indicator of the ability to successfully breastfeed!

Regardless of whether you're leaking colostrum of not, you can still give expressing it a go. Many women are advised by their Midwife or Obstetrician to collect some colostrum during the later weeks of pregnancy to store for use after birth.

This is common practice for mums with gestational diabetes to help baby to regulate their blood sugar but increasingly, women with uncomplicated pregnancies are jumping onboard the colostrum expression train to build up a stash.

Why Express During Pregnancy?

Expressing during pregnancy means that you'll have some colostrum saved and on hand for after birth, should your baby need it.

Senior Midwife, author, and international maternity consultant Kathy Fray has found that collecting colostrum can be super helpful, especially for bubs who may need a little extra help after birth.

"With babes we know could likely be low-birth-weight or babes known to be growth-restricted or at risk of hypoglycaemia, it can be fantastic to already have some frozen colostrum to supplement the vulnerable newborn in their first days of life to avoid topping-up with artificial formula," says Kathy. "However, there is certainly no reason that a healthy mother with a healthy newborn can't also hoard some colostrum antenatally. It's a brilliant idea!"

Having colostrum on hand is also useful for those early, cluster feeding days when your milk is still coming in or if, for some reason, you needed to be separated from your baby after birth.

When to do it?

Your caregiver can advise on when you can start expressing during pregnancy but it's generally thought that towards the end of pregnancy is ideal. "With a healthy normal pregnancy, because nipple stimulation can trigger uterine contractions, I would say from 37 weeks onwards," says Kathy.

If you've never expressed milk before then the process might seem a LITTLE bit daunting. First things first, don't even consider your electric pump, at least initially. You'll be producing and collecting tiny little amounts and the stimulation of an electric pump can be a bit much. Gentle hand expression is the way to go. The La Leche League has a great infographic HERE that can help.

The best way to store your colostrum is in sterile syringes. Kathy advises using the smallest size and then freezing. "Collect the milk with a 1ml sterile syringe (that has no needle) and simply freeze the filled syringes." It's a good idea to pop the filled syringes in a sandwich or other ziplock bag with a date on the front, just to keep track of when you expressed. 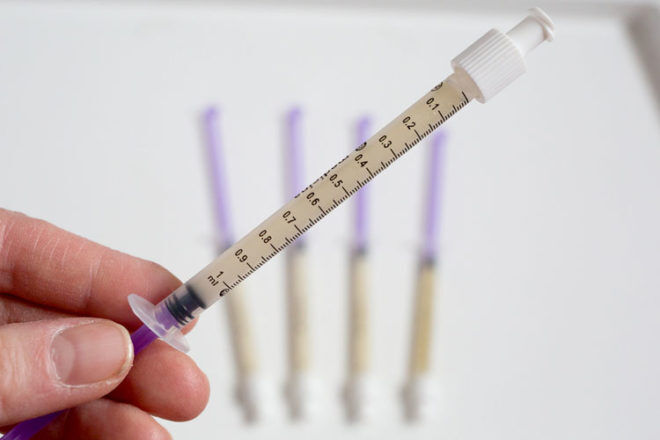 A lot of our Milkbar community have found that the Haakaa Silicone Breast Pump works really well to express colostrum. Simply suction it on and usual gentle massage to help the colostrum move out of the breast. Then transfer to your syringes.

As with almost everything breastfeeding (and motherhood!) related, it can take some time to get your head around expressing. Be gentle with yourself, keep trying and seek support and guidance from your midwife or a lactation consultant. There's not much more exciting than packing your hospital bag.Your hospital and how long you're staying will determine what you need to pack in your hospital bag to some extent BUT there's still a list of essentials that can make even the shortest stay that little bit more comfortable.

How to Use a Milk Collector (And Why You Might Want To!)

Haakaa
There's a new kid on the block. Meet the Haakaa Silicone Milk Collector. Similar in some ways to the Haakaa Silicone Breast Pump the silicone milk collector is more cousin than twin; yes, the two products share some features BUT they've also got some key differences. We walk you through them here and explain how and why a milk collector might work for you.
Read More

Do I have enough? How to know if you're making enough milk

Am I making enough milk? It's a question most new mums have asked themselves when establishing breastfeeding for the first time.

We spoke to registered nurse, midwife and Lactation Consultant Cathy Shortt from Milk & Mums Co to get the facts to help put your fears to rest.